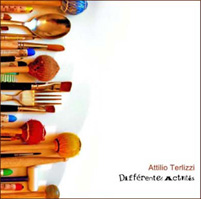 The idea of my first album came from meeting two composers, the Italian Luigi Morleo and the French Jean Luc Rimey- Meille. Ambassadors of percussion sensitivity in  international music, these two composers deeply influenced my professional improvement.
Therefore I wish to dedicate this project to them, performing two concerts in which my music sensitivity is more effective.
After many years of artistic career, I received the first prize at  the European Music Compétition, in 2003.  Luigi Morleo in that occasion dedicated « oltre la linea di fuoco 4 » to me; a concert for marimba and orchestra, devoted, together with other pieces, to war refugees.
In 2005, after two years of works together, Jean Luc Rimey-Meille creates for me the « Différentes activités », a concert for percussion and string orchestra. Playing with other professional players was important as well. My creations  were infact performed by   « Lyon Symphonietta », a string orchestra of young musicians from the National Conservatory in Lyon and two talented percussionists: Rémi Pina et Josselin Vinay. In order to make the project real and coherent, the two composers take part to it consistently. So, Jean-Luc Rimey- Meille is the art director of the album, while Luigi Morleo directs his concert. Christian Cailliéret directs « Différentes Activités » and the recording made from 20th to 26th Frebruary 2006 at Atrium of Tassin Demi-lune.